Royal Caribbean’s newest ship, the aptly-named Quantum of the Seas, will be unveiled in November 2014 with high-tech experiences straight out of a sci-fi film.

Let’s start at Two70, a multi-level entertainment environment which boasts huge mobile monitors, robotically controlled, that “dance” and move about. They are veritable performers in their own right, setting moods that range from whimsical to moody and everything in between. 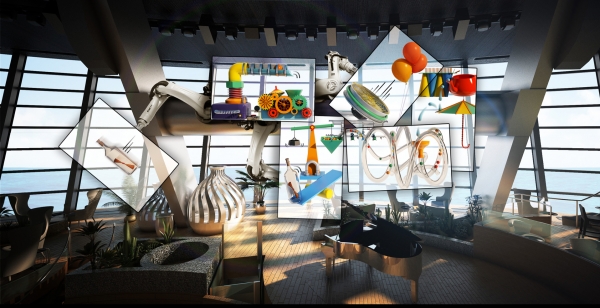 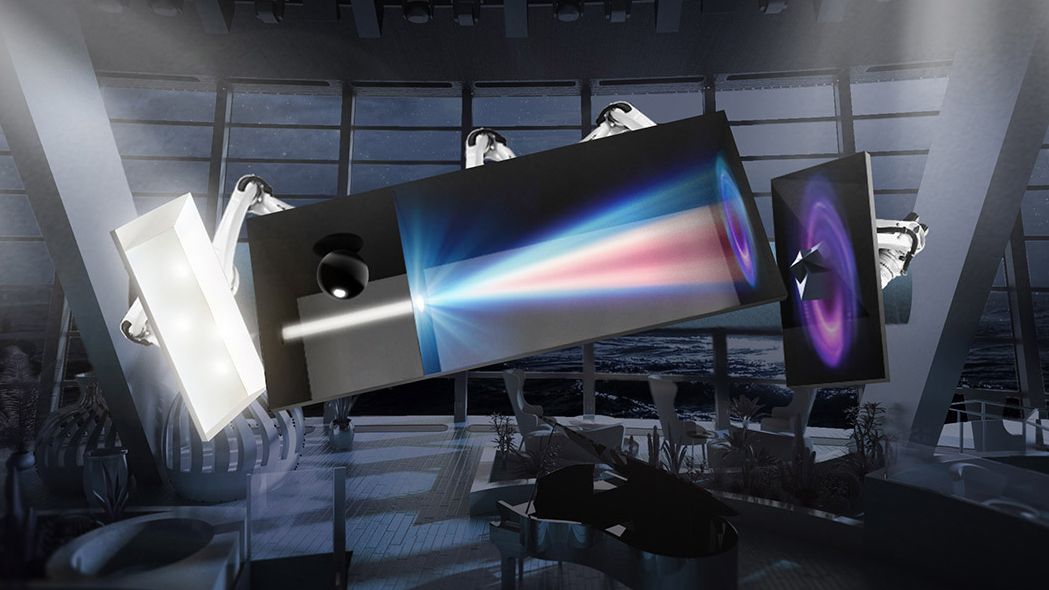 The vast wall of windows transforms into a seamless screen, projecting landscapes ranging from primeval forest to deep space and more, as performance backdrops or for amazing dramatic effect. 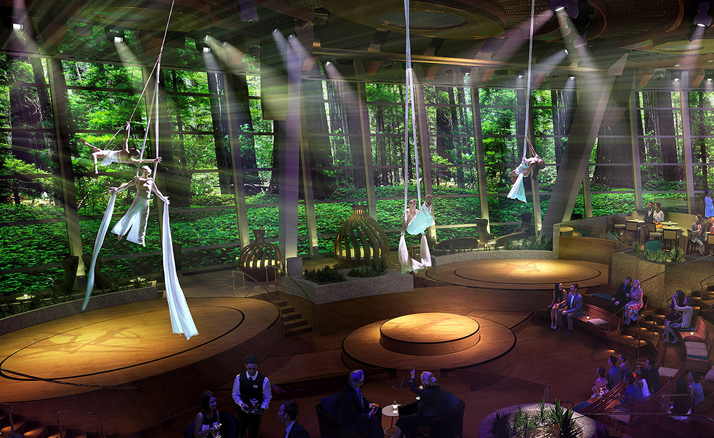 Speaking of cyber-scenery, Royal Caribbean has also innovated virtual outside cabins on Quantum of the Seas, where inside stateroom walls project real-time moving images of the ocean and ports beyond your “balcony.’ 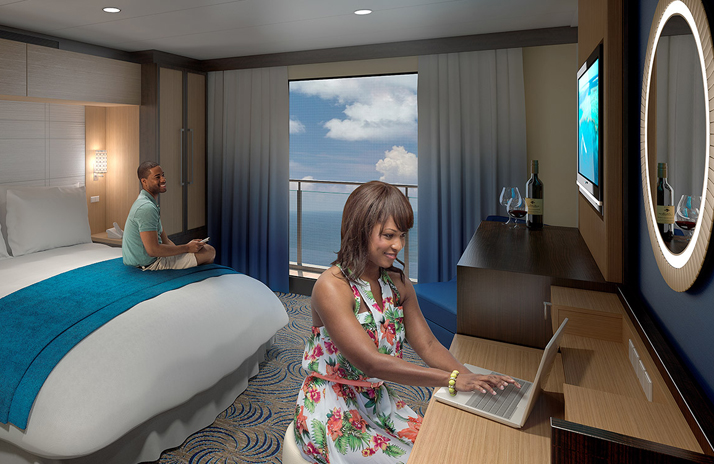 Radio frequency identification (RFID) technology has been around for a while (think microchips), but RCCL has applied this technology to streamline guests’ experiences on board. With a microchip embedded in a wristband, guests can easily make onboard purchases without the need of an easily-misplaced key card, or digitally access and print those souvenir photos, or use their Smartphones to upload boarding documents. Guests can even track their luggage from the time it’s left with the porters until it reaches the stateroom. 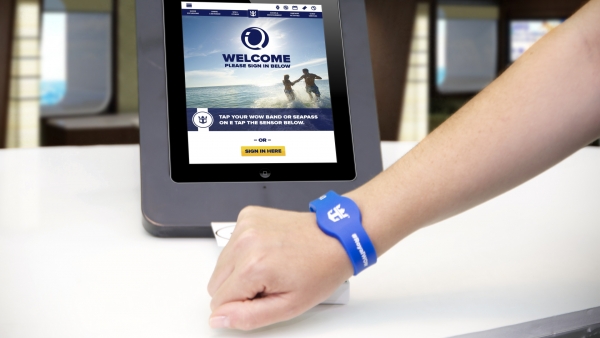 We can’t wait to grab a drink at the Bionic Bar, a modernistic pub with a cutting-edge twist. Instead of a couple of good-looking and super-friendly humans serving up cocktails and conversation, outsized robot arms will be mixing drinks in full view of the patrons. Adding to the futuristic vibe, rather than jostling your way through the crowd and vying for the barkeep’s attention, you simply order your drinks from a table-top tablet, then watch a mechanical mix master do its thing. 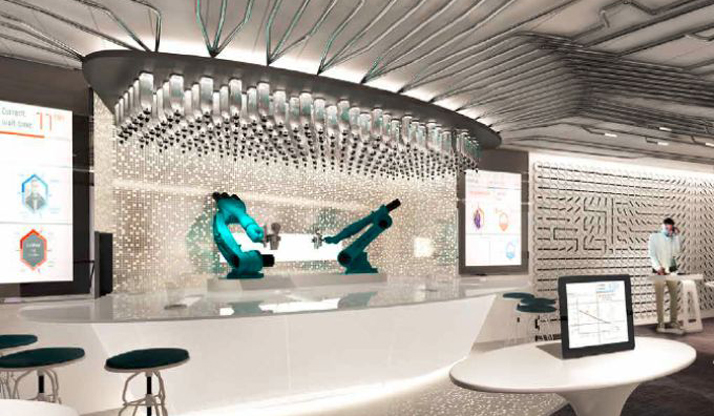 We all know that in the 21st century, a multitude of disciplines employ robots: medicine, manufacturing, the military, space & underwater exploration, to name just a few. At Quantum’s Bionic Bar, you’ll not only get a rare opportunity to see a robot at work, you get to place the order that tells it what to do next!

It’s a cool concept that fits well with the “smart” motif of the ship.

Royal Caribbean is also introducing the Royal iQ app. Once onboard, download it and easily customize your vacation. Book shore excursions, make dinner or show reservations, with just a couple of taps to your Smartphone. 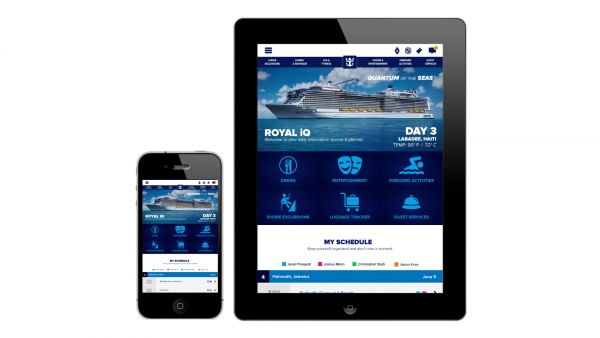 Behind the scenes, the Royal Caribbean Quantum of the Seas will utilize the O3B. Literally a constellation of telecommunication satellites, O3B orbits lower than other telecommunications systems and actually follow the ship’s path, resulting in possibly the fastest connections at sea. Effortlessly check your email, Skype with family and even conduct business (if you must). 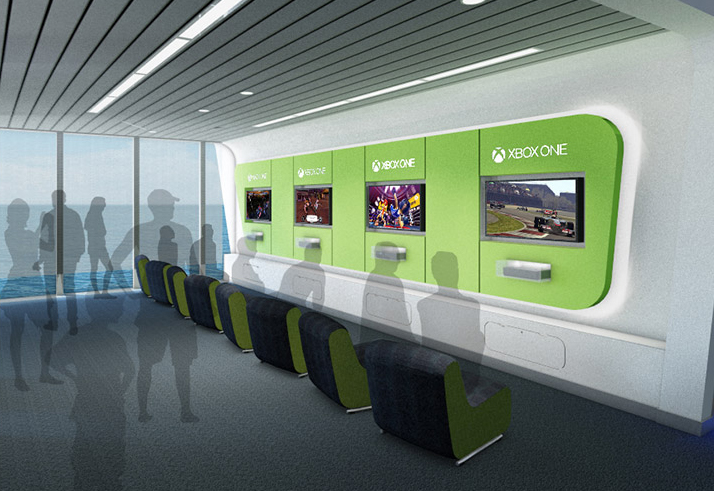 Or how about playing Xbox against your friends back home in the SeaPlex, an indoor sports and entertainment complex? It’s a quantum leap into the future, if you will.

Quantum of the Seas will sail the Caribbean in its inaugural season, before repositioning to her home port in Shanghai, China in May 2015. But not to worry! Her sister ship, Anthem of the Seas launches in April 2015. After the Spring/Summer season, she will reposition to Cape Liberty, New Jersey to cruise the Bahamas and Caribbean for the winter 2015-16 season.

*All images of Quantum of the SeasSM are computer generated and reflect proposed design. Designs, features and itineraries are subject to change.