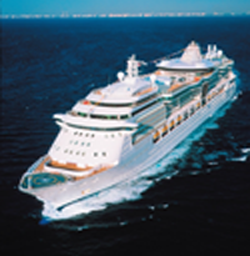 Two American-based cruise lines, Royal Caribbean Cruises and Norwegian Cruise Line, are going to try “interporting.” Interporting means there are two or more embarkation (and disembarkation) ports during a cruise, allowing passengers to choose where they want to begin and end their cruise. The practice is quite common on European-based cruise lines.

Royal Caribbean International (RCCL) will experiment with interporting during the 2012-13 winter season on the Brilliance of the Seas’ two Southern Caribbean itineraries. The ship will be in the home port of San Juan every Saturday and in Guadeloupe (the interport) every Wednesday. Passengers can choose to embark in either port. Wherever passengers board, they will stay on the ship for the entire length of the 7-day sailing and disembark in the same port. This option won’t make much of a difference to Americans, who would most likely choose to embark in San Juan rather than Guadeloupe. But there is a benefit here for South Americans, as Guadeloupe is further south than Puerto Rico.

In Europe, however, interporting will have more appeal to Americans who can choose their embarkation based on their interest in visiting a city pre- or post-cruise, or the cost associated with flying to a particular city. If interporting catches on in the US, for example on Canada/New England or west coast/Alaska cruises, the attraction for travelers will be that they have more opportunities to board the ship much closer to home, perhaps saving thousands in air and hotel costs.

As with Royal Caribbean Cruises, passengers must begin and end their cruise in the same city and complete the entire 7-day voyage; in other words, they can’t shorten the trip by embarking later or disembarking earlier.

Interporting has generated interest recently due to the tragic Costa Concordia accident. The Concordia had just interported in Rome; 600 passengers had just embarked, yet there was no additional lifeboat drill. In response, both Royal Caribbean Cruise Line and Norwegian Cruise Line have announced that their regulations will require lifeboat drills on the day of each and every embarkation, in other words, whenever new passengers come aboard.

Interporting is likely a win-win-win situation: for cruise lines; for travel agents who can offer more options to their clients; and most importantly, for passengers who would have even more choices in planning their vacations.