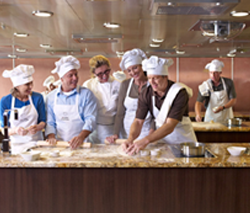 March 29, 2012 – Along with the unveiling of the new Oceania Riviera in May 2012, Oceania Cruises is expanding its culinary programs by introducing new Culinary Discovery Tours on Riviera and her sister-ship, Marina. As with other Oceania shore tours and excursions, these are unique to the port. The difference is that the focus is on food and cooking. On these tours, small groups of Oceania guests will accompany a master chef to food markets in the port city to learn about and sample local ingredients and dishes. In many cases, lunch is included. Oceania guests may be treated to a visit, for example, to an artisan cheese maker, a gourmet chocolatier, a vineyard or a fish market. After the port excursion, guests will return to the ship’s Bon Appétit Culinary Center for a cooking class inspired by the visit.

Oceania Cruises Culinary Discovery Tours will begin this spring in Europe and are scheduled in more than 25 ports worldwide, starting in Europe this spring, and rolling out in Asian, South America and the Caribbean in winter 2012-13. Oceania’s smaller ships will not be forgotten either. On Regatta and Nautica, Culinary Discovery Tours will combine excursions to local markets with hands-on experiences at a local cooking school or a well-known restaurant kitchen.

The culinary enrichment program also caters to guests who would rather stay on board. “Hot Topics” classes will be offered in the Bon Appétit Culinary Center. A series of 1-hour lectures and demonstrations, the classes include Oceania Highlights, featuring recipes from Oceania Cruises’ signature restaurants; Healthy Cooking, inspired by Canyon Ranch; and Emerging Cuisines, focusing on Moroccan, Peruvian and Asian-fusion dishes.

In 2012 new classes will include Beyond Brie: the Innovative Cheeses, where guests learn how to assemble a cheese plate; and Favorite Pairings with Favorite Foods, which showcases innovative finger foods paired with cocktails and beer.

The icing on the cake is the Oceania Cruises fleet-wide introduction of Cuisines of the World programming. For every port, each ship’s Grand Dining Room and Terrace Café will feature culinary highlights and local signature dishes. The ship’s daily newsletter will feature fun food facts, cuisine recommendations and general morsels of gastronomic knowledge pertaining to each port. During most voyages, guests can attend free cooking demonstrations in the ship’s main lounge.

Oceania Cruises has always been distinguished by its cuisine, whether in the main dining room or in the top-flight alternative restaurants. When Marina was launched in 2011 with the first hands-on culinary school at sea, the on-board culinary experienced was further enhanced. With this new program, says Kunal S. Kamlani, Oceania’s President, “we are taking culinary enrichment to a whole new level to solidify our reputation as the cruise line for epicureans.”