Crystal Cruisers Get to Sleep In

Vacations are supposed to be relaxing. Especially cruises. The whole idea of cruising is to unpack only once, eat to your heart’s content, be pampered, and return to the real world feeling refreshed. But that’s not always the case. How many of us have uttered these words: “I need a vacation after that vacation!”

Our travel dollars are precious, so we try to pack in as many experiences as we can in one trip. In many cases that means rushing out to early morning shore excursions. Cruise ships typically arrive in ports by 8 am (often earlier), and the first shore excursions commence soon thereafter. So guests grab breakfast on the run and hurry off the ship as soon as they are allowed, to meet up with their tour guide. It’s rushed. It’s frenzied. It’s not at all relaxing.

Crystal Cruises is changing that by being the first cruise line to offer excursions that begin later in the morning – 11 am or even as late as noon.

Crystal is already known for superior service. Now there’s an extra level of pampering for discriminating cruisers who wish to unwind and relax on their hard-earned vacations. The first “Late-Risers” tours will be unveiled during Crystal Serenity’s September 19 Boston-Québec sailing, and next on Crystal Symphony’s September 27 Hamburg-Lisbon sailing. Examples of adventures with later start times include: 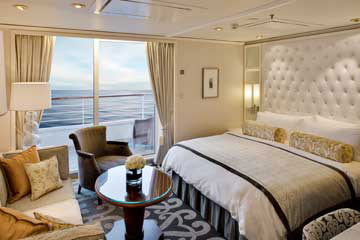 These later tours complement the late-riser’s breakfast, which is served on both Crystal ships from 10 to 11:30 am. Sleeping late doesn’t mean missing breakfast either!

Explore the world with Crystal Cruises. But first, go ahead and sleep in.